This addictive bubbly white wine from Italy is made from the Glera grape, the same variety used to make Prosecco, which is on fire in terms of popularity right now. Winemaker Pierluigi Lugano was long time friends with a winery owner that produced a Prosecco of his own. Pierluigi’s friend was frustrated that people were not willing to pay a slightly higher price for fruit from a vineyard that had some gnarly old vine Glera, he was considering ripping the old vines out but Pierluigi convinced him to sell the beautifully concentrated fruit and he began bottling this Bisson Glera. Bottled under crown cap this wine is a sheer pleasure to drink. Bright snappy peaches, fresh cut grass, hints of lemon and basil. The tiny bubbles dance across the palate leaving it tingling and aching for more. We brought in the first five cases as a test run, they were gone in 2 days. Never buy one bottle, always two and at 11% alcohol you can, “Drink it by the gallons” as the staff has been saying since we got it in. This one, this one was worth the fight and you owe it to yourself to get some! 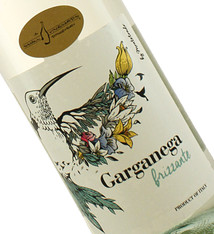