Banned by the Mexican government until the 1990s, the Sonoran artisan spirit of Bacanora is now a trending version of Mezcal. And The Wine Country has discovered a surprisingly delicious example.

Discovering the Beauty of this Once Notorious Beverage

Back in February, I wrote an article introducing folks to the Izo Brand of Agave spirits.  I had recently acquired the majority of the offerings Izo produces, and was (and still am) excited to show you what they make.   Since then, I have had a few people come in, try one of the Izo expressions and come back with glowing reviews.

But what has surprised me the most is no one has tried the Bacanora yet.  Like Sotol, Bacanora is an under-the-radar category for wild agave spirits, but they are so good!  The vibrancy and freshness give it a unique profile that stands alone.  And with Izo they are all about standing out.  I guess it’s understandable that few people are familiar with Bacanora.  Until a few years ago, it wasn’t even available for export to the United States.

The story of Bacanora itself is a fascinating one.  An agave spirit made in the Mexican state of Sonora (the border state south of Arizona and New Mexico), Bacanora was once banned by a prohibitionist governor of Sonora in the early 1900s.  The abuse of Bacanora had apparently become so widespread that anyone caught drinking or making it were threatened by imprisonment, and according to one report, even death.

Despite these severe sanctions, Bacanora was bootlegged during the intervening decades until 1992, when the ban was finally lifted.  In 2000, the Mexican government issued an origin denomination, establishing guidelines for its production and restricting the production of Bacanora to about three dozen towns in the state of Sonora. 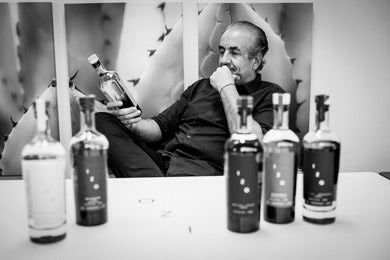 Gaston Martinez founded Izo with the focus of showing how Mezcal was made in Durango, Mexico.  Using the Cenizo Agave (see where the name Izo came from?) for his Joven and Reposado, adding Lamparillo Agave to his Ensamble, Angustifolia Agave for the Bacanora and Dasylirion Wheeleri for his Sotol, Gaston is showing off wild plants and how when treated properly can make beautiful libations.

Each offering from Izo is as expressive as their bottles are.  The dark smoke that starts at the bottom of the bottle and becomes translucent as you go up is like the smoke vapers of the volcanic pits that roast the piña of the Agaves used in Izo.  And the onyx tops are not only eye catching on their own, but are sourced from Durango, just one other way Gaston Martinez represents his state proudly.

Not only is the Izo Bacanora my favorite expression from the Izo brand, I also like how Bacanora is from Sonora, Mexico.  (And that little rhyme has always helped me remember where it was made.)   Bold smoke makes this spirit seem like it will be robust and aggressive.  But just as quick as the smokiness takes over your palate, it slips away to the back, allowing the savory profile of this Sonora spirit to take main stage.  Vibrant pops of lime and fresh black pepper gives it a freshness and makes it lively, allowing those fresh flavors and smoke to linger for a bit.