Since centuries the "Würzgarten" has been considered as one of the best vineyard sites on the Mosel. In 1804, under the reign of Napoleon all vineyards in the French Empire were classified, including those on "La Moselle", then French territory. The parcel "Weltersberg", where the grapes for this wine originate from, was classified as a "Grand Cru" at par with the Grand Crus in Burgundy.  The unique red slate soil adds minerals and creates a wealth of aromas of spices and fruits, predominantly ripe mango accompanied by peach, apricot, mint and petals on a backbone of minerality and ripe acidity. 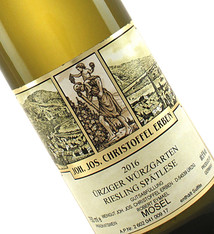