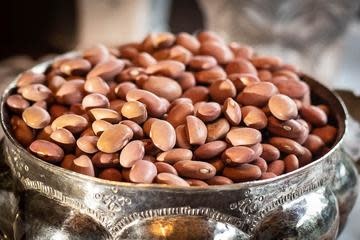 A new heirloom bean from King City, California, with a rich history and a dreamy bean broth. It has a thin skin and a dense yet creamy interior.

King City Pinks were mentioned by John Steinbeck in his seminal novel, Tortilla Flat. They helped put King City, California on the map in the 1930s and the bean's popularity peaked just after World War II. They remained popular locally but they have taken a backseat to the more glamorous Santa Maria Pinquito from further south. Yes, we said glamorous.

You would think these pink beans would be a good substitute for the small, pink Santa Maria Pinquitos, but they're not. King City Pinks are closer to Buckeye. They are outstanding in their own right. They're dense but not stodgy. They have a thin skin and produce a dreamy bean broth. We are in love.

"Finally, she called Danny's friends into her kitchen and explained that it was beans that they needed. The fire of their passion renewed, that night, four shadowy figures snuck past the sleeping guard and into the Western Warehouse Company. They emerged shortly afterwards struggling through the shadows under the tremendous weight of four one hundred pound sacks of pink beans.” -from Tortilla Flat by John Steinbeck