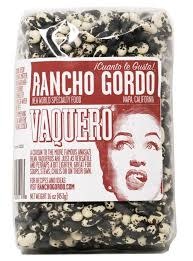 A classic chili bean that holds its shape through long, slow, cooking  and exudes a generous, dark, rich broth.

A really lovely cousin to the Anasazi bean, Vaquero have intriguing black and white markings, not unlike an appaloosa horse might don. The flavor is somewhat like the Anasazi but it's a little lighter. The real fun is the inky, black pot liquor. It looks cool and tastes great.

Vaqueros are light and just slightly potato-like, but they keep their shape and would be one of our first choices for a chili bean. We also enjoy them as a classic charro bean, cooked simply and then finished with bacon, tomatoes and maybe a little stale beer.

Vaqueros are also known as Orca beans but so are several other beans. Vaquero really look like horses more than whales!

Cooking suggestions: Use in pot beans, chilis, and stews.

Recipes and more information on Vaquero Bean at Rancho Gordo.