Last month I wrote about several new rums we received into the store, and I finished by saying, keep an eye out for more coming in.  Well, I’m happy to say more are finally here!

Finding new rums for you all to enjoy has been fun, and I have been introduced to a handful of new products that I am excited to share with you.

And I just wanted to give a quick thank you to you rum fans out there who have come in and tried the new arrivals mentioned in last month’s post.  It’s always nice when the enthusiasm I have for these products is matched by you out there.

A blend of rums from Jamaica, Barbados and Trinidad. This is just a light and easy Agricole style rum. Light notes of vanilla leads to a creamy mouthfeel that coats the palate. There is a slight funk on the finish which gives it that Agricole feel. For anyone who likes Plantation Rum, this is a great substitution if you’re looking for a new Rum.

A blend of Rums from Trinidad and Barbados aged in American and French oak for at least 5 years before being finished in first-fill Pedro Ximenez sherry barrels for 3 months. Soft notes of Agricole funk will be a familiar characteristic for most rum fans.  Hints of plums and cocoa give this spirit some richness and body. Funk lingers in the background, vanilla coating finish.

A combination of Pot Still and Column Still rums made in Jamaica and then brought to Kentucky to be blended, the Exodus is a really enjoyable expression.  Your palate is introduced to a rounded mouthfeel that coats the palate.  Vibrant baking spice helps cut through the mouthfeel and gives the spirit a little zip.  Caramel and vanilla bean come out on the finish again rounding out the mouthfeel.  There is a lighter Agricole funk on the finish.

Blending Rums from Jamaica, Guyana, and Barbados, this is a super easy drinking Caribbean Rum, a great sipping spirit. Lighter notes of Agricole funk up front leads to a richness similar to toasted toffee and creme brulee. The floral funkiness from up front and the richness balance each other out very nicely. The vanilla flavors linger for a while.

By far one of the most interesting spirits we carry in the store. I am underselling the process, but this Rum was made in an alcohol instapot!  Using a diffuser made by the owner of Lost Spirits, the company is able to make a spirit taste like it has been aged for years and years in only a week.  The result is a rum with rich dark chocolate and dark roasted coffee flavors.  A savory tobacco leaf characteristic brings a little more herbal flavors to the profile while toasted vanilla and cocoa powder adds to the richness from the beginning

The Master Blender of Demerara Rum 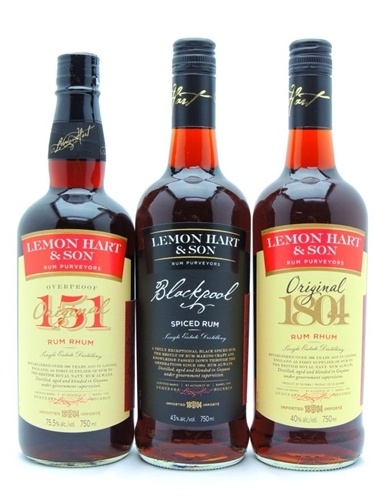 When Lehman (Lemon) Hart took over the family rum importing and trading business at the age of 22 in 1790, little did anyone know how he would change the rum world.  While his father and grandfather took the approach of bringing in rums from around the world and selling the barrels, Lehman had the idea of blending rums to make his own label.  Working with Demerara rums from Guyana.  Lehman was able to blend together a rum he found good enough to put under the Lemon Hart label, which would later become Hart & Son.

He was not alone in how much he enjoyed the rum; Lemon Hart became the official supplier to the British Royal Navy. I could only imagine what kind of recruiting is needed when a ration of rum per day is part of the deal.

While the Hart family no longer owns the label, the traditions set up by Lehman Hart and his family still hold through today. Only estate-grown Guyana sugar cane is used to make their rum, which is made in a wooden coffey still and a wooden pot still to this day.  We are carrying 3 rums from Hart & Son; Original 1804, Blackpool Spiced Rum and 151 Proof.

Called 1804 for when Lemon Hart became the official supplier to the British Royal Navy, this was the rum that put Hart on the map. Earthy root characteristics up front give this spirit a unique profile. While most Rums are either floral, sweet or funky on the front of the palate, this one is earthy, which could be seen as funky by some. Dark chocolate and caramel bring a richness and a roundness to the finish. While there are other rums that are made in pot stills which lead to an oily mouthfeel, just like the earthiness at the beginning of this taste profile, the 1804 has a unique mouthfeel.

First thing most people think of with spiced rum is that it is going to be sweet. But that is not the case for the Guyana spiced rum. Bright notes of cinnamon tickle the palate while bark and earthy characteristics also found in the Original 1804 come out. Cola spice along with nutmeg bring a big savory note to the profile while a hint of vanilla on the finish rounds out the flavors and brings a light creaminess to it.

While there is some heat to this rum, I mean it’s 151 proof, there is gonna be heat, it doesn’t burn like many of us have experienced with overproof spirits. Just like the Lemon Hart Original 1804, you get earthy characteristics and the dark chocolate, just the caramel stands out a lot more to help balance out that heat from the proof.